Rogue4k is a minimalistic Rogue-ish game in under 4000 bytes for the The C64 'Cassette 50' Charity Competition  . The compo is now over and the game is released and can be downloaded as a PRG-file, or played in the browser on this page.

Cassette 50 was an infamous collection of games published by Cascade in 1983 and an early example of shovelware, marketed on the basis of sheer quantity rather than the quality or playability of its games.

This competition is about creating a brand new compilation tape - with any proceeds to be donated to charity - featuring games by C64 developers of all levels of experience, focusing on great gameplay in a mini-game format while still retaining the look or feel of a Cassette 50 game, such as it was!

Story:
You are Zendar Slickweed. You have wandered the earth for what felt like eaons looking for interesting dungeons to explore. At last you have found what you are seeking! The dungeons of Rogonia are waiting!

You are hunting for gold and fame. Mostly fame, but the gold is nice to have too! The only problem is that there are evil cave dwellers lurking in the dark waiting to kill you as you travel deeper and deeper into this cube-like terror maze.

Controls:
Joystick controls movement. To grab loot just walk over it. To attack monsters, just walk towards them.

Joystick Fire to restart game after Game Over.

Aim of the game:
Get as far and deep into the dungeon as you can! Get the highest score!

To play the game, download the game file. This D64 file will work with The C64 Mini/Maxi, C64 emulators and a real C64.

If you are lucky enough to own a real C64/128 you can transfer the files to disk and play on real hardware.

If you want to play it on your PC/Mac we recommend using an emulator called VICE. Remember to use the latest version of Vice to get the best emulation.

When I send it over RR-Net it just crashes?

Hi, the prg file is the same we released for the contest. It should work on a regular C64, but since Rogue4k uses all sorts of unsafe memory areas (below address $0400) I am guessing that the RR-Net transfer might interfere with the code for Rogue4k. Sorry about that.

I have uploaded an updated version of the game (rogue4k_v8.prg) that is tape-loadable, and should work for you. I would love to get some feedback if it works or not, since I have no way to test with RR-Net. :-)

Now we just need to make it multiplayer! ;)

Is it open source?

Also a way to tell that you have a key would be nice!

Thanks for letting us know it works!

The game is not open source, but the repo might become public at some point. The assembly source is highly obfuscated because I had to do a lot of trickery to squeeze it into less than 4000 bytes. If you are interested in the source dm me at @bag_of_hats on twitter. :-)

Regarding extra features, we will not be updating this project because it was made for a contest, but we are working on an extended version of this game which we have called Rogue64. The new game will add a few extra features. Here is a screenshot of what will be on the zzap64 coverdisk: 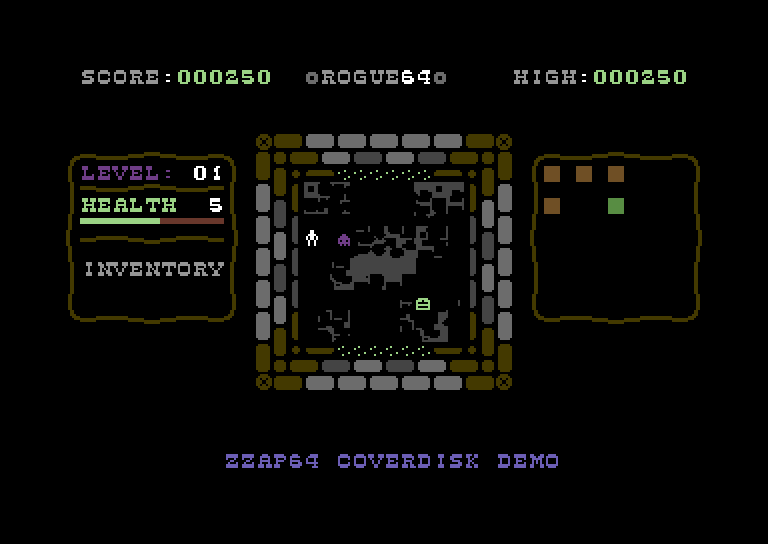 Neat game. There's more depth to it than I initially thought. ;)

I noticed 2 bugs: there was one instance where enemies overlapped (or cancelled each other out?) and once the game crashed (v4) after switching to a new level (player char invisible, 3 map squares at the bottom right uncovered).

Also the delay when moving is too long, 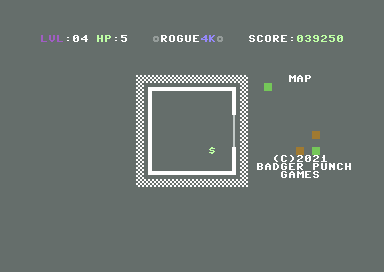 Thanks for playing the game! I will see if I can trigger these bugs and fix them. I haven't seen them myself yet, so I guess I will have to do some more extensive testing! =)

Regarding the speed I ran out of bytes and had to make a compromise between moving and combat delay. I didn't have enough bytes to differentiate the delay between them.

Check out the latest version. The crash-bug and other weirdness should be gone now. =)

Love this game, and thanks for updating!
I did notice that some enemies bodies stay after they have been killed. It did also crash on me after finishing the 1st level.

Thank you! And thank you for the bug report! For some reason I hadn't tested level changing on this itch.io build. I have now updated the game and fixed so level changing works again. :) 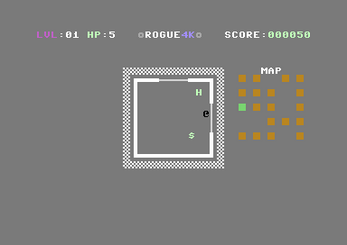